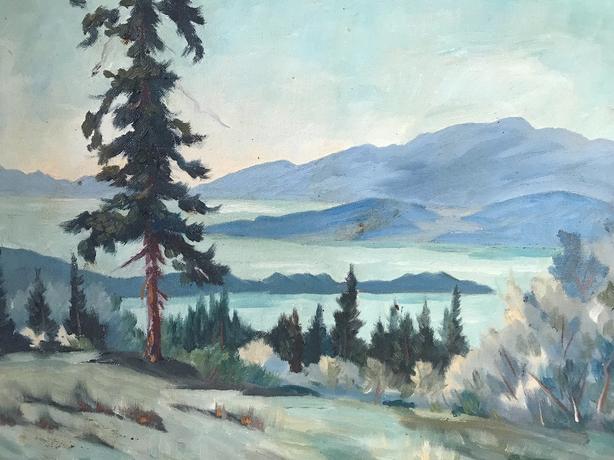 Offered for sale is this Canadian list artist signed oil painting on board, the painting is clearly signed in the bottom right hand corner R.L. Harvey ( Reginald Llewelyn ) born 1888 and passing in 1973. The painting a coastal scene of Patricia Bay on Vancouver Island is titled on the back.

Reginald Harvey ASA - has exhibited across Canada including the National Gallery in Ottawa and Canadian National Exhibition in Toronto to name a couple. This painting could certainly use a cleaning and appears to still be in the original frame.

Please feel free to contact me with any questions.

Reginald Harvey studied at the University College, Southampton, England (his hometown school); the Yarmouth School of Art, Norfolk; and at the Regent Street, Polytechnic in London. He came to Calgary, Alberta in 1912. Harvey was the Supervisor of Art, Calgary Schools 1922-31 and, for twenty years, he was in charge of the Calgary Exhibition & Stampede Art Department. It is considered that Harvey was influential in the hiring of A.C. Leighton by the Provincial Institute of Art & Technology. The two artists, who were fast friends, were sketching companions on many trips to the mountains and foothills of the Rockies. A.C. Leighton and Harvey co-founded the Alberta Society of Artists.

Influenced by the British tradition of tonalism (overall tone of colored atmosphere or mist), the artist worked in oils, watercolors and did a level of printmaking.

Harvey exhibited his work at the National Gallery of Canada, Vancouver Art Gallery (solo, 1943), the Canadian National Exhibition in Toronto, at Hart House (Toronto), and the Manor Richelieu (Quebec). He also exhibited with the Montreal Art Association, the Manitoba Society of Artists, and the Ontario Society of Artists.

Harvey retired to Victoria, B.C. in 1951 and lived there until his death in December 1973.