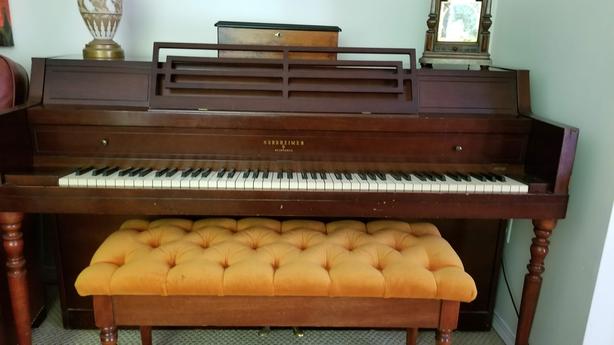 A nice Nordheimer that has been enjoyable to play.

Downsizing.
Plays as it should and sounds great.
In great Tune.

A very nice size piano,suitable for an apartment,as well as a larger home.

The Nordheimer Piano & Organ Company was established by brothers Samuel and Abraham Nordheimer in 1844. The firm was located at 122 King Street, Toronto. For the first 2 decades, the firm worked as importers and retailers of pianos, organs and melodeons. In about 1866 they built their first pianos with much success. The firm continued to grow and flourish during the rest of the 19th Century, building a full line of uprights, squares, and reed organs. In 1886, The Nordheimer Brothers went into partnership with Gerhard Heintzman of Toronto and opened the Lansdowne Piano Company, Ltd. In 1890, Nordheimer built a new, state-of-the-art factory in East Toronto. In 1927, Heintzman purchased the Nordheimer name and continued to produce Nordheimer pianos until the 1960's.